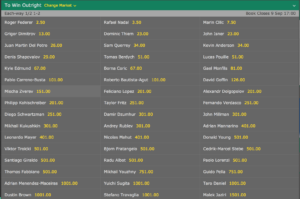 We lost some favourites already before the start, with Djokovic, Wawrinka, Murray, Nihikori not coming to start. Today we saw 4th seed A. Zverev, 8th seed Tsonga and 14th seed Kyrgios being knocked out. This leaves the field quite wide open. Federer, Nadal and Cilic are the top 3 favourites at the moment on the men’s side. With all of them having won the US Open in the past! Federer 5 times, Nadal 2 times and Cilic 1 time.

On the Women’s side there has also been some upsets with 5th seed Wozniacki, 6th seed Kerber and 11th seed Cibulkova being eliminated. Sharapova has shown good signs since her return from her 15month doping suspension. She and Venus Williams have won the US Open before, Sharapova back in 2006 and William in 2000 and 2001.